Acts 8 BLOGFORCE Challenge: Why the Church?

When I saw this week's Acts 8 BLOGFORCE challenge--to answer the question "Why the church?"--I was immediately taken back to a sidewalk encounter I had in downtown Montgomery several years ago. It was the middle of a hot summer day. I had left Kiwanis and was walking back to the church when I saw someone I had not had contact with in almost ten years. He had been my co-counselor at a summer camp in north Alabama. We had spent a summer working there together, and one of those months was spent in the same cabin, looking after ten boys as if we were their parents. We made sure they brushed their teeth and changed their underwear. We tucked them in at night and took them to the bathroom if they woke up needing to go. There were a few moments when our "parenting styles" came into conflict, but we worked them out. We departed on good terms, but our divorce had been prearranged, and neither of us made an effort to keep up.

We began the conversation with pleasantries--trying to fill in a decade's worth of personal history. I was wearing a clerical collar, which makes it hard to hide my profession. He asked about my church, and I nervously told him where I was serving as a curate. The camp where we worked was and still is a Christian camp with strong ties to a particular denomination (not the Episcopal Church). I recalled that many of the counselors were very committed to their own expression of church, and, while working there, I tried to avoid denominational conversations among counselors for fear of getting into a "how-can-you-believe-that!" argument. Standing on this sidewalk, having experienced a hardening of denominational lines in the ten years since we last saw each other, I hesitated to return the question, but southern etiquette required me to show interest, so I asked. Where do you go to church? The answer shocked me.

"I'm not going to church," he said, but he showed no sign of embarrassment or hesitation when he spoke. In fact, he said it proudly. "Really?" I said, not knowing how to interpret this brazen heathenism. "Yes," he answered, reaching into his jacket pocket. As he handed me some religious literature, he explained that the church is a sign of evil in the world, that it has become corrupted, and that real disciples of Jesus were following their Lord and Savior without any institutional affiliation. Part of me admired him for leaving the kind of denominational hardlinership that we had experienced at camp, but another part of me quickly recognized that he was nuts. (Remember, I'm the one wearing the clerical collar--he was talking about me!) He launched into an explanation that I cannot really remember, but I left thinking three things: 1) I have no idea how you can be a Christian without any affiliation with church, 2) his strategy had merely substituted the formalized doctrines of "no church" for the church he had left, and 3) I wanted to avoid bumping into him in the future. 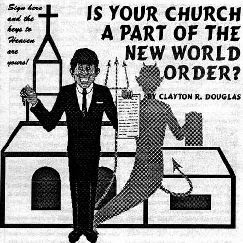 The church is the body of Christ. The Son of God is still incarnate, and the collection of believers that exist on this earth are the manifestation of that incarnation. The world might not need all of the churches we've got, but the church exists because there are believers. In other words, one doesn't need to belong to a church in order to be a Christian. One is a part of the church simply because one professes to follow Christ. In a very real way, the question "Why church?" has a simple and unavoidable answer: "because there are Christians." You can't have one without the other--no matter how wayward you believe that the institutional church has gone.

Throughout history, there have been repeated movements to reestablish the primitive church of the apostles. These groups argue over things like whether there must be one cup at Communion, whether music is allowed in worship, and what sort of headdress women are required to wear. Often, these movements are propelled both by a desire to get in touch with ancient expressions of Christianity and to leave behind a current expression with which the group is unsatisfied. The point is that human beings will always be dissatisfied with the institutional manifestations of Christianity, and they will continue to tweak them and abandon them and reestablish them and all because church is unavoidable. It is who we are.

This seems to be one of those times when churches are reinventing themselves. Shifts in secular culture, advances in science and technology, and internal disputes within the church have led us to a point where people are asking questions like "Why church?" I, for one, am not discouraged. Think about the apostle Paul and the challenges he faced in his various churches. He had a hard time getting them to respect one another's authority (1 & 2 Corinthians). He struggled to get them to sit down with one another (Galatians). He even had a hard time convincing them to believe in the basic principles of the faith (1 & 2 Thessalonians). But the institutional church--with its orders of ministry and forms of initiation and hierarchical affiliation and financial controls--arose with alarming speed. Within half of a century after Jesus' death and resurrection, the church (largely as we know it today) already existed.

When I think of the question "Why church?" I feel a tension between the human institution that modern Christians know and with which they claim affiliation and the sacred institution ordained by Christ as the entity against which the gates of Hades will not prevail (see this Sunday's gospel lesson). But remember that Christ is fully human and fully divine. That is the basis of the incarnation, and it is the foundation of the church. We are a painfully human institution, but that is why God became flesh--to experience pain. We are a broken body, but that is why God's Son came to earth--to take our brokenness upon himself. Why church? Because we are the body of Christ--literally. That's where we start. We can be no other. What it means to be that body and how we are to respond to that identity are questions for another day...and another BLOGFORCE challenge.