God Is With Us

Audio of this sermon can be heard here. Video of the service can be seen here. 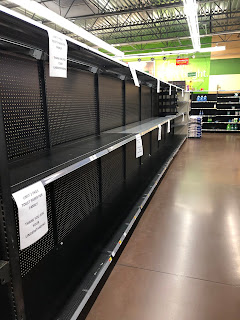 The whole congregation of God’s people journeyed through the wilderness in stages, from one camp to the next, as they made their way toward the land that God was giving them. A tremendous mass of people and property—women, men, children, livestock, and goods—were being carted across the land. Everything that they owned was with them, being carried or dragged through the desert. They were on their way to a life that none of them had known before, but it was a life full of hope and promise. The uncertainty of it all made everything feel a little risky, but so far God had been with them every step of the way, and surely God would not leave them now. But, then, the great horde of people came to a new camp, and, when the people looked around, they discovered that something critical—something essential to life—was absent from this new place, and they panicked. They came to Moses and cried, “What are we going to do without any toilet paper?”

Things are getting pretty serious, aren’t they? Stores aren’t just out of toilet paper. People are lining up outside of stores before they open to be sure that they get some only to find out when the doors open that there isn’t any. Although a few patients have reported related symptoms, the coronavirus isn’t causing widespread gastrointestinal problems. Instead, people are stocking up on toilet paper because they’re worried that they may be stuck at home for weeks on end. That’s the reality that we are facing—a world in which people are cut off from one another and from any reasonable supply of toilet paper for the foreseeable future.

Have you ever actually run out of toilet paper? When I was a freshman in college, I went to Thailand and Vietnam with a group for a month. At the end of our trip, the night before we flew back to the States, after a month of eating some pretty bold dishes, we decided to play it safe and eat in a local shopping mall. Halfway through the meal, the trip caught up with me, and I had to excuse myself to find a bathroom. I asked someone who worked in the mall for directions, and he pointed me downstairs—three floors down—where the public restroom was. I hurried down two escalators and across the courtyard and entered the facility only to discover that there was no toilet paper in the stall. I checked the next stall—nothing. In fact, there wasn’t even a toilet paper holder anywhere to be found. Confused, I looked on the wall of the restroom by the door and saw mounted upon it a toilet paper vending machine that only took coins. I frantically reached into my pocket but found none.

I raced—as quickly as I could—back across the courtyard and up two escalators to my colleagues, who were still eating dinner. “I need some change,” I said pointedly. No one asked me why. Coins in hand, I shuffled all the way back down to the restroom, put my coins in the vending machine, pulled the lever, took out the small cardboard box, and dove into the nearest stall. Safe…or so I thought. But, when I opened the box, I found two translucent-thin squares of tissue paper no bigger than the palm of my hand. I had no more coins. So I did the best that I could with the two squares that I had, and then I tore up the cardboard box and used it, too. And afterwards I washed my hands really, really well.

The truth is that most people in the world don’t use toilet paper. That dispenser in the restroom was put there for westerners like me. In Thailand, as in most countries throughout the world, people use squatting toilets and clean themselves with buckets of water and ladles that were provided free of charge in every stall. For me, the lack of toilet paper was a crisis, and, in the midst of that crisis, it became exceedingly difficult for me to keep everything in proper perspective. Isn’t that so often the case with God’s people?

The story of Exodus is a tale that is propelled by profound irony, but little snippets like the one we read for our first lesson make that irony hard to see. In Exodus 17, we read that the people of Israel had journeyed from the wilderness of Sin until they got to Rephidim, where there was no water to be found. “Give us water to drink!” the quarrelsome and parched people said to Moses. “Why did you bring us out of Egypt, to kill us and our livestock with thirst?” Their crisis was real. Unlike toilet paper, people and livestock really do need water to survive. But their need for water isn’t what makes this story ironic. It’s how quickly they forgot what had happened before they got to Rephidim.

In Exodus 16, the previous chapter in the story, the people had grumbled about another problem. This time, it was hunger that had them upset. “If only we had died by the hand of the Lord in the land of Egypt, when we sat by the fleshpots and ate our fill of bread,” they had said to Moses. “For you have brought us out into this wilderness to kill this whole assembly with hunger.” Sound familiar? In response to that crisis, God had given them quails and manna. By God’s mighty and miraculous hand, God had caused food to appear out of nowhere to make sure that the people did not starve. After that, just one chapter later, did they really think that God would allow them to die of thirst?

In Exodus 14, the people had grumbled about yet another crisis. This time it was Pharaoh and his army that had been pursuing them. “Was it because there were no graves in Egypt that you have taken us away to die in the wilderness?” the people had cried out to Moses. “What have you done to us, bringing us out of Egypt? Is this not the very thing we told you in Egypt, ‘Let us alone and let us serve the Egyptians’? For it would have been better for us to serve the Egyptians than to die in the wilderness.” Can you hear a pattern? Of course, God had not abandoned them that time either. Instead, God had told Moses to lift up his staff and stretch his hand across the Red Sea and divide it so that the Israelites could cross through the sea on dry ground.

In Exodus 15, the people had sung a song of rejoicing to their God—to the one who had “triumphed gloriously,” who was their “strength and their might,” who had become their “salvation.” But, anytime the people of God journey out into the wilderness, a crisis is bound to find them, and, each time it does, it is our nature to forget everything that God has done for us. “Why did God bring us out of Egypt, setting us free from Pharaoh’s yoke by God’s mighty hand, only to only to kill us and our children and our livestock with whatever crisis will come next?” Why, indeed.

God has not brought us this far only to abandon us now. Yes, the crisis we are facing is real, and, no, I’m not talking about toilet paper. There are so many things for us to worry about. I am preaching to an empty church because our congregation cannot gather in person but must assemble virtually. We don’t know how long this pandemic will persist. We don’t know when we will have enough testing supplies to determine who is infected and who just has allergies or the flu. Will our hospitals and pharmacies and other medical institutions be able to handle the crisis? What will those who depend on schools and churches and other community agencies for food do if those organizations are forced to stay shut for weeks or even months? What will you do if you are exposed to the virus? What will you do if someone you love, someone you depend on, someone you can’t live without, tests positive for COVID-19? I don’t know. We don’t know. But we do know that, through it all, no matter what happens, God is with us. God has not brought us this far only to abandon us now.

“The LORD said to Moses, ‘Go on ahead of the people, and take some of the elders of Israel with you; take in your hand the staff with which you struck the Nile, and go. I will be standing there in front of you on the rock at Horeb. Strike the rock, and water will come out of it, so that the people may drink.’” We do not know how long it will be before the answer we seek springs forth from the rock like a gushing stream, and we don’t know whether that answer will come instead as trickle—just a few drops at a time. But we do know that God will be standing there in front of us. The record of our faith is undeniable: God is always with us—most of all when God’s presence is hardest to perceive.

In a crisis like this, it is easy to forget that we are not alone. Cut off from our church and from one another, we begin to think that our problems might win, that the crisis might get the best of us. But it won’t. It can’t because our God is with us. No matter where we go, no matter what happens, God is with us. Even if we make the grave our bed, the psalmist says, God is there.

Before the people of Israel left that place, Moses called it “Massah and Meribah”—literally “Testing and Quarrelling”—because that was the place where the people had tested and quarreled with God. The crisis that they had faced became a monument not to the answer God gave them but to the fact that they almost allowed themselves to believe that God had forgotten them completely. At times, this crisis may make us feel a little like that. It may cause us to lose our perspective and forget that we belong to the one who has always come to save God’s people. Do not lose heart. Do not let your worries keep you from seeing the truth that God is with you. Do not forget that, no matter what the test, our God will save us.

Posted by Evan D. Garner at 11:46 AM
Email ThisBlogThis!Share to TwitterShare to FacebookShare to Pinterest
Labels: Sermons