More Work To Do 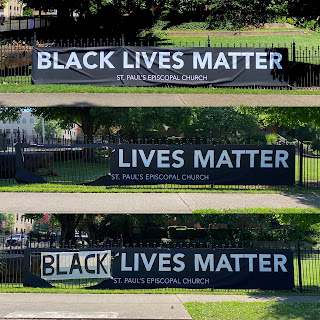 This post originally appeared in the weekly newsletter of St. Paul's in Fayetteville. To read the rest of the newsletter, click here.

Last Wednesday, some members of our parish staff and I hung a Black Lives Matter banner on our church’s fence that faces East Street. On Monday morning, we discovered that someone had cut a hole in that banner, removing the word “Black” from its proclamation. That discovery has helped me understand a few things a little more clearly.

First, the damage to the banner reminds me that racism is an active force in our local community. I am not naïve enough to think that, as a university town with a penchant for the progressive, Fayetteville is immune to such expressions of hatred, but, as an affluent white male, I have the luxury and privilege of mostly being removed from their effects. That someone would attempt to destroy our banner shakes some of the comfort from that isolation and brings the reality of racism closer to us. Still, this was not an attack on me or on our church in the same way that people of color are the targets of hatred, but, if you thought that we were mostly past all of that, think again.

Second, the specific removal of the word “Black” from “Black Lives Matter” helps me understand the extent to which white individuals, including me, are threatened by the idea that black lives have been devalued through racist societal structures, which are the legacy of slavery and for which we are still responsible. Here is what I mean by that. A common, instinctive retort to those who proclaim, “Black Lives Matter,” is to say, “All Lives Matter” or “Blue Lives Matter.” But those who support the Black Lives Matter movement do not think that the lives of white people or police officers are any less valuable than the lives of black people. Instead, they want to draw attention to the ways in which society continues to place less value on the lives of people of color, including, among other things, the disproportionate number of black victims of police violence.

Yes, police officers like our own Stephen Carr are tragically murdered by criminals and deserve to be honored for their sacrifice, but to take the word “Black” and replace it with something else obscures the reality of racism in our society. It makes members of the dominant, white culture feel better by allowing them to amalgamate the violence being perpetrated against people of color with other forms of tragic violence, further diffusing their discomfort. Here is an imperfect analogy that I have seen other people use. The “Save the Rainforest” campaign was not a slight against other forests around the world, but to say “Save All Forests” would undermine the critical need for directing our attention to a threatened ecosystem. In other words, we can find ways to address other societal needs without diminishing the reality that our society continues to place less value on black lives than white lives. To literally, physically cut “Black” out of the “Black Lives Matter” banner is to enact a symbolic violence upon those victims of real violence to which the banner is calling attention.

Third, the damage confirms that we cannot stop talking about racism. Other than the coronavirus, it feels like the only thing that we have heard about or read about for the last few weeks is police brutality, racism, protests, and rioting. I know that congregations like ours can only handle so much exposure to these societal pressures. I know that many of you would rather hear a sermon about love and forgiveness than sin and repentance. That is part of our privilege, and it hurts to let it go. This week, I would love to have written an article about our parish’s new virtual engagements with VBS and Children’s Chapel and youth formation, but I cannot do that. In light of what happened to our banner, I cannot put off writing about racism for even another week.

You may have seen the meme on social media that depicts Jesus proclaiming, “Blessed are the poor,” and one of his hearers responding, “No, all are blessed!” The work of combatting racism is not just about social justice. It is also the work of the gospel, and it is, in particular, the work of our parish. We believe that God created humankind in God’s image. We believe that God united Godself to humanity in the Incarnation. We believe that Jesus suffered and died and was raised from the dead so that all people might be reconciled to God and to one another. We believe that the power of sin and the forces of evil actively work against that reconciliation. And we believe that, as followers of Jesus who are empowered by the Holy Spirit, we are called to promote the dignity of every human being. In short, racism is an affront to all that we believe. As a prominent, wealthy, historically white congregation, St. Paul’s is in a position to lend its voice, its efforts, and its resources to the work of combatting racism. The damage to our banner has proven that, if ever we needed to proclaim “Black Lives Matter,” the time for that is now.

The work of dismantling racism, however, is much harder than hanging a banner on a fence and repairing it when it is damaged. It requires honesty, which at times is painful. It demands sacrifice, which is always costly. This episode with the banner also reminds me how much I still have to learn. I need to ask myself why I am upset by it and whether my emotional response has more to do with what I perceive to be a personal loss than the ongoing epidemic of racism of which I am a part. I need to work on my own vulnerabilities until I am more upset about the incalculable cost of racism than the destruction of a $400 banner. What work do you need to do? I am grateful for all the expressions of support that have been made in response to the banner and the damage that was done to it, and I hope and pray that this incident will help us recommit to the faith-filled work of combatting racism for as long as it takes.