There's a certain sobriety that sticks with you after you've stood in the place where so many human beings in chains walked and stumbled and sweat and bled. Today we went to another castle--the one in Cape Coast--but none of us expected the story of that place to be any happier. It wasn't.
This time it was the British who built the castle. Like Elmina, it was the Portuguese who first settled here, but the British first built a stone castle to guard this side of the coast much later. The story was similar but came with a few nuances.
This castle was built specifically for the slave trade--the dungeons were not converted storerooms; they came with channels already dug in them to funnel the urine of hundreds of people out. The Door of No Return was built with slaves in mind--it had two huge doors for letting spices and sugar and supplies in and out but would have had two small door cut within it for letting the men and women out one at a time.
In Elmina Castle we heard about the small crack-of-a-door being to prevent escape. At Cape Coast Castle, we learned that it was also to make it easier to count the slaves. "Only one at a time could pass through, so, if a ship only held 200 or 400 or 600, when you had the right number, that was it."
Numbers. A bill of sale. A bill of lading. These are human beings.
Later on, we traveled to St. Nicholas Seminary, where we were warmly received by the Dean and were given the chance to celebrate the Eucharist together. Using the lessons for William Wilberforce's day, we worshiped and prayed together. During the sermon, we had a chance to share our reflections on the trip. I heard some powerful stories.
One in particular really hit me. She spoke about keeping the line of connection between these two castles and the country we go home to alive and open. She said that we need to remember that many of the problems we experience in the United States have their roots right here in Ghana and elsewhere on "the Slave Coast."
I hadn't thought of it that clearly. Poverty, race relations, drug abuse, the segregation of our culture--they all journeyed down these tunnels and were crammed in these boats and set sail across the sea as both captive and captain. The guide at Cape Coast Castle asked us all to find our roots here in Ghana or elsewhere in Africa. He wasn't only speaking to the people of noticeably African decent. He was speaking to those of us whose identity was born in this place as oppressor and captor. My European roots lead right here, too.
This was our last full day together. Our fellowship has been surprisingly strong. We spent little time getting to know each other, but, since we spent every waking minute together for a week or more, these pilgrims are my sisters and brothers. I was proud to have them as companions on this part of the journey. I will miss them. 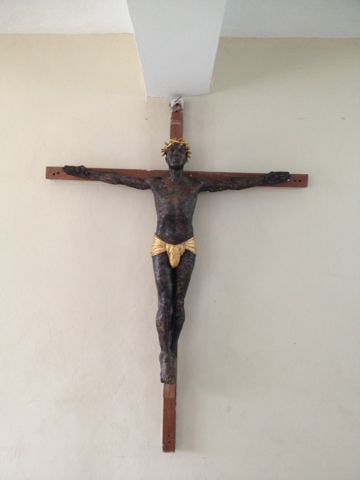 Posted by Evan D. Garner at 12:16 AM
Email ThisBlogThis!Share to TwitterShare to FacebookShare to Pinterest
Labels: Africa Trip