Audio of this sermon can be heard here. 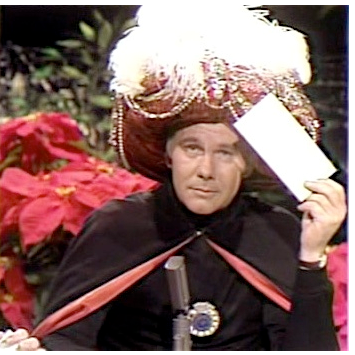 
Earlier this year, I was on a Cursillo staff with Robert Wisnewski, my old boss. A few days before the weekend began, I asked Robert if we were going to do his famous skit, and he told me that he had been thinking about it. He asked me if I was up for it, and I told him, “Absolutely.” I had been watching old YouTube videos of the Tonight Show Starring Johnny Carson for weeks, just hoping I’d have the chance.


Who here remembers Carnac the Magnificent? That was Johnny Carson’s character who wore the gigantic turban and kept the audience laughing with his deadpan humor. He was a “visitor from the east” who, through his “divine powers,” could give the answer to a question inside a sealed envelope even before it had been opened. I knew by reputation that Robert Wisnewski could do a very good impersonation of Carnac. My worry was whether I would be an adequate Ed McMahon.


I vaguely—very vaguely—remember when Johnny Carson was on the Tonight Show. I was only eleven years old when Carson retired, so, even though I was casually familiar with Carnac, I knew I needed to do some homework before going on stage with Robert. So I watched a lot of YouTube videos, and the more I watched the more I realized that Ed McMahon’s role was a hard one to play—maybe even harder than Carson’s. I learned all of the lines—“Since eleven o’clock this morning, these envelopes have been hermetically sealed and kept in a mayonnaise jar on a porch at Funk and Wagnall’s. No one—NO ONE—has seen the contents of these envelopes, yet you, O Great One, with your amazing powers will divine the answers to the questions even before the envelopes are opened…” But that’s the easy part. The hard part wasn’t knowing what to say. It was knowing what not to say.


For thirty years, McMahon was Carson’s sidekick. For thirty years, he played second fiddle. For thirty years, he had to bite his tongue to keep himself from jumping to the humorous ad lib before Carson got there himself. As McMahon wrote in his autobiography, “I had to support him, I had to help him get to the punch line, but while doing it I had to make it look as if I wasn't doing anything at all. The better I did it, the less it appeared as if I was doing it.”[1] It’s hard work making someone else look good, and McMahon was masterful at it. You have to laugh obsequiously when the boss’ joke isn’t really funny to let the audience know that you’re teasing him a little bit, but you can’t take it too far or else you make him look like an idiot. There’s an art to being a co-host or a vice-chair or a sidekick or a curate. And mastering the art of playing second fiddle starts by remembering who you are and, more importantly, who you aren’t.


In today’s reading from John, we meet the Ed McMahon of the gospel: John the Baptist, the man sent from God, who came as a witness to testify to the light. As the gospel writer tells us, “He himself was not the light, but he came to testify to it.” Two thousand years later, we take it for granted that John the Baptist wasn’t the messiah because we know the whole story. We know that he played the role of the forerunner, the herald, the set-up man. But, back then, to those who were watching John the Baptist’s following grow, to those who were leaving their homes to go out into the countryside to hear him preach and to watch him baptize, that wasn’t clear at all.


“Who are you?” the priests and Levites asked John the Baptist. “Who are you? Are you the messiah? Are you Elijah? Are you the prophet? Who are you? What do you represent? What should we make of you and your ministry?” For a while, the religious leaders in Jerusalem had been watching him. They had noticed how more and more people were going out to hear what he had to say. People seemed caught up in his message. They were willing to leave their jobs and their homes and their families to go and follow him in the desert places. The authorities could not deny his charismatic gifts. So many people had been drawn to him and his message of repentance. The religious leaders wanted to know what they were dealing with, so they sent representatives to go and ask him who he was. And they were shocked at what they heard.


“I am the voice of one crying out in the wilderness, `Make straight the way of the Lord,’” he told them. “I am not the messiah, nor am I Elijah, nor am I the prophet. I am none of those things. I am just a voice—the voice of God’s servant crying out in the barren places that the time to prepare for the coming of God and his kingdom is now.” But that didn’t make sense to them. He was acting like the main attraction. He was drawing headliner crowds, but he was telling those crowds that he was just a sidekick, a set-up guy, a voice reminding the people to look for something else. The priests and Levites didn’t understand how that could be. John the Baptist was too popular, too gifted, too impressive not to take center stage. He deserved a show of his own, but he didn’t want it. Instead, he wanted to be the person he was made to be and to fill the role God was calling him to fill.


John the Baptist shows us that we cannot know what it means to wait for God and for his kingdom until we know who we are and, more importantly, who we are not. So who are you? And who aren’t you? Are you the star of your life, or are you the co-host? Do you want the spotlight, or are you willing to yield it to someone else? Do you take credit for the successes in your life, or do you use them to point others to the one who has given you those successes? John the Baptist had everything, but he gave it all away because he knew that the only thing that mattered was the one who would come after him. What about you? Can you say the same? Do you draw people to yourself, or do you point people to Jesus?


There is a God, and you are not him. That might sound like a simple, obvious statement, but it is a profound truth, and it is the true origin of faith. Nothing can begin until we understand that—that there is a God and that we are not him. From our first parents—as long as there have been human beings on the earth—we have wanted to be like God. And, as long as we are striving to be that which we are not—as long as we indulge in the illusion that we are our own master—we cannot know what it means to need God in our lives. That is the first sin. God is waiting to come into our hearts and minds, but that can’t happen until we accept what it means to be human, which is what repentance is all about.