Profiting Off the Backs of Widows


Although I avoid long prayers at all costs, I do wear a pretty long robe on Sunday mornings. I don't always get the best seats at dinner parties, but I do have a reserved spot in church. And I can't deny that I enjoy a respectful greeting in the grocery story...if by "respectful greeting" that means "a quick hello and not a 15-minute counseling session in the produce aisle." In short, as Jesus describes it in Mark 12, I am a scribe of whom you should beware.

Early this week, I wondered just how close I would get to the "devouring widow's houses" in my writing and preaching. My compensation comes directly from the money that people put into the offering plate. Some of them are widows. Some of them give a remarkable amount. Am I living off the backs of the poor? I still don't know a lot about what sort of contributions were expected of people in Jesus' day. Was the synagogue system unbalanced? Were poor people contributing too much? Were the religious elites profiting from the draconian demands on widows? Am I propagating the same system in the 21st century? Is Jesus talking about me?

I do take stewardship education seriously. I do think that God is calling all of us to make a sacrificial gift. We are supposed to discover more deeply what it means to depend on God through our giving. I talk a lot about the tithe as the normative practice for Christians--that we are called to give at least the first 10% of our income away to support God's work in the world. A poor widow's tithe is a lot smaller than Warren Buffett's, but I'm serious about that call being universal. I hear from lots of people who are living on a fixed income. "I don't have very much. I can't give very much." That's true. You can't. You can't give as great an amount now as you could a few years ago. But Jesus' celebration of the widow's two copper coins as more than anyone else had contributed suggests that it's not an amount that matters but the proportion. And I don't just mean the percentage. By "proportion" I mean both the percentage of your income and the share of your heart and life that it represents.

Elizabeth and I give 13% of our gross income to St. John's. On top of that, we also support the diocese and other local and national charities. I don't say that to suggest that you should measure your giving in comparison with ours. I say it to make it clear that I practice what I preach. Is 13% enough? No. We're still looking for ways to grow in our giving until, hopefully, one day we will have sold all that we own and have given it to the poor.

But, when it comes to living off the backs of widows, I am still guilty as charged. Why? Because I live in a state where regressive taxes are among the highest in the nation. In the State of Alabama, we all participate in an economic system that ensures the scribes will continue to wear their long robes and the widows will continue to give all that they have and more to support it. Take a look at this screenshot from www.itep.org: 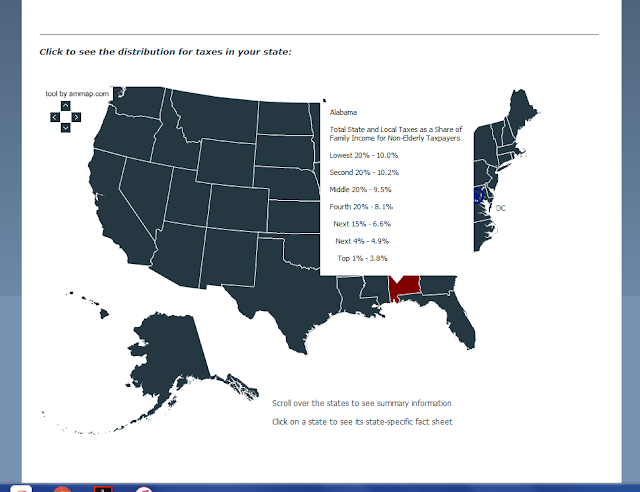 I don't know much about itep.org. They claim to be an non-profit, non-partisan group that does research on tax policy. I'm not vouching for them or their work. But those percentages seem about right to me ("right" as in "accurate" not as in "just"). Why do I think those are accurate? Because we tax groceries. That means the same carton of milk that our family uses in a week costs my family less as a percentage of our income than a low-income worker who makes too much for food stamps. In Alabama, we have low ad valorem property taxes and high sales taxes. We have high fees for things like licenses and car tags and court costs--things which everyone needs regardless of their income. As a result, we are forcing--not asking--widows to put in everything that they have while the scribes continue to enjoy the best seats at the local charity banquet. Am I guilty? Yes. And so are many of us.

I don't plan to preach on regressive taxes this week, but my friend Jack Alvey and I were talking about Sunday's lessons, and he reminded me that this is an important issue. We are guilty--not only as clergypeople but as citizens of this state. I haven't been able to let it go. Alabama isn't alone in this, but Alabama is where I live. And, given its current tax policy, Alabama is a long way from the kingdom of God.
Posted by Evan D. Garner at 7:59 AM
Email ThisBlogThis!Share to TwitterShare to FacebookShare to Pinterest
Labels: RCL Reflections