What the Wise Men Teach the Church


Audio of this sermon can be heard here.

In many cultures, today--the Epiphany--is a bigger celebration than Christmas. As a child, I grew up racing down the steps on Christmas morning to see what Santa had brought. Now, as a clergyperson, I rejoice with tears in my eyes during the singing of Adeste fideles ("O come, all ye faithful") at the opening of the late service on Christmas Eve. As a Christmas enthusiast, it's hard for me to imagine looking forward to the end of the twelve days and the celebration of the coming of the three kings on January 6, but, theologically speaking, I'm more excited about today's epiphany than the nativity of thirteen days ago.

Historically speaking, today is the day when I get to come to the manger and adore the newborn king. (Yes, I know that Matthew omits the nativity narrative and that it's not fair to conflate Luke's story of the manger with Matthew's story of the wise men, but I'm trying to paint a picture, so get over it.) Today is the day when Jesus the Messiah--a term that designates a strictly Jewish identity--is made manifest to all the peoples of the earth as the one and only hope for all creation. Today, Gentiles like me (and the vast majority of Christians) find our long-awaited place in the salvation story of the God of Abraham, Isaac, and Jacob.

But it's more than that. As important as that moment was two-thousand years ago, I think the story of Epiphany is the most important story that the twenty-first century church can hear and tell.
﻿
Stop for a moment and think about how the story is told--how it unfolded. We say it well in the collect for today: "O God, by the leading of a star you manifested your only Son to the peoples of the earth..." The star is more than a cute detail for a children's sermon or catchy line for a familiar hymn. The star is how God chose to reach down and share the news of the savior's birth with the wise men. As such, God chose their spiritual language--their way of thinking and knowing. They were not Israelites. Perhaps they were familiar with the story of the Jews, but it wasn't their story. The God of Israel had never realed himself to the Israelites through the stars. Astrology was the field of other eastern religions. It was pagan. It was foreign. It was forbidden. Yet, in the birth of Jesus, God was doing something universal--something that wasn't just for the children of Abraham--and God chose a means that would connect his great act with those who were unfamiliar with the usual means of God's manifestation--the prophets, the scriptures, the Temple worship, the traditions. In other words, at the Epiphany, God went rogue.

But it was too small a thing for the God of Israel to breakthrough into the religious lives of the eastern sages by using an astrological sign that was familiar to them. God met them where they were, but he wasn't finished with them yet. God's sign led them to Bethlehem. The Jewish authorities, when asked by the sages, named the city of David as the place of the Messiah's birth. These foreigners--these Gentiles--were not simply met where they were and left there; God found them and brought them in. And that is the message of the Epiphany for the contemporary church. 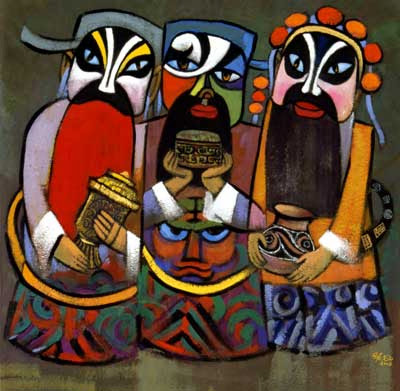 Adoration of the Magi by He Qi (2001) - linked from ancienthebrewpoetry.typepad.com
What is the spiritual language of the church? What is the spiritual language of the unchurched world? My preferred language is found in the Rite One BCP services of Morning Prayer and Holy Eucharist. That's my natural way of connecting with what God has done and is doing in the world. But I recognize that I'm in the minority--both within our church and, more substantially, in the world. If I stand on a street corner in cassock and surplice and invite people to join in the pseudo-Elizabethan language of those liturgies, I may attract some quirky and curious onlookers, but I think I'm unlikely to connect in a way that leads to conversion and a lifetime of discipleship. God chooses to meet the people of the world where they are--in star charts and coffee shops and TED talks and self-help YouTube videos and ironic eCards and Instagram posts and catchy memes. But, at the same time the church is seeking to communicate using the spiritual language of the contemporary world, it cannot forget that God isn't interested in meeting people where they are and leaving them there.
The wise men were brought to Bethlehem so that they could adore the baby king Jesus and present him with gifts. Warned in a dream, they departed by another road. It is no accident that they did not go back the same way that they had come. They were changed. God was not through speaking with them. Now, having pursued the star, they could hear Israel's God in a way that God typically spoke to his people--through dreams. As the church, we must adapt our language but not lose our story. It is not good enough for us to make people feel warm and fuzzy and loved and then walk away as if a momentary warm feeling is the vision God has for their lives. We must find a language that succeeds in inviting the peoples of the world to come and encounter Jesus. Yes, God is able to meet them even in pagan, foreign, forbidden ways. But God isn't going to leave them there, and neither can we.
Posted by Evan D. Garner at 12:15 PM
Email ThisBlogThis!Share to TwitterShare to FacebookShare to Pinterest
Labels: Feast Day Reflections, Sermons