God Is For Us


I don’t remember what day it was or who the Cubs were playing, but I remember that at some point in the latter innings of a game at Wrigley Field, a duck flew in and landed on the warning track at the base of the ivy-covered brick wall. It was a distraction—for the players as well as the fans—and the ground crew supervisor asked for a volunteer to go and get the duck. “I ain’t scared of no duck,” I thought to myself, as I raised my hand to volunteer. “Alright,” he said to me, “go get it.”


It was in between innings, of course, and the door that the ground crew used was right in the left-field corner of the stadium. When the door opened, I could see that the duck was already on its way toward center field, waddling away from me. I started out the door in a hurried trot, and I thought I heard my boss call out to me, “Don’t run!” It turns out that he was saying, “Don’t hurt it,” because he didn’t want an animal-rights protest to erupt because some knuckle-headed college kid had injured a duck in front of a stadium full of people. I slowed down and approached the duck carefully, and then, as the duck looked over its shoulder at me and bolted in the opposite direction, it hit me: how in the world am I supposed to catch a duck?


There was no place for me to corner it. It was certainly faster than I was. And, as I lumbered toward the bird with outstretched arms, there was no way for me to assure the duck that I was actually there to help it—that I wanted to get it off the field and on its way back to Lake Michigan before it got stepped on by Gary Matthews, Jr., or Sammy Sosa. The closer I got to the duck the faster it ran away. At one point, I think I may have been within four or five feet of the intruding waterfowl, but the start of the next inning came up before I could get any closer.


How do you convince a duck that you’re not going to hurt it—that you want to be its friend? Similarly, how does God convince us that he isn’t out to get us—that he’s really on our side?


He could send someone into the world to teach us about his love. Someone patient and kind and wise. Someone people looked up to. But how would we know? If he came as a little child and grew up knowing more about God than anyone else on earth. If he led an exemplary life and lived as a model for all of us. If he never had an unkind word or a selfish thought. If he never thought of himself before thinking of others. Do you think we would believe him, or would we brush him aside as another pretender with skeletons in the closet that we just haven’t found yet?


What if God sent someone who risked everything he had to demonstrate the power of love? Would that make a difference? If he risked society’s shame by associating with outcasts and sinners. If he ate with prostitutes and tax collectors. If he reached out a hand of concern to touch the lepers whom no one else would dare approach. Would we see in him a sign that God loved us like that, too? Or would we label him a wide-eyed optimist whose ideas would never take hold?

What if God’s anointed servant went ever further than that? What if he accepted the rejection and punishment that of all humanity deserved, asking nothing in return? Would that get through to us and show us once and for all that God is on our side? If he was innocent but willingly walked the path toward execution? If he remained silent in front of his accusers and let them have their way with him? If he accepted rejection and defeat, refusing to struggle or fight back? If he suffered in an excruciating and humiliating way but still only prayed that God would have mercy on us, then would we believe him? Or would we wonder whether the God to whom he prayed would have mercy only on the righteous few? Would his gift of sacrificial love be so great that we would question whether we deserved it? Would we still wonder whether God was really on our side or still out to get those people who did not live a life worthy of that sacrifice? 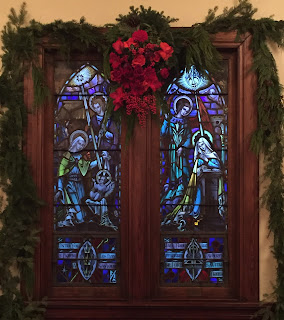 The Incarnation Window decorated by
the Flower Guild of St. John's, Decatur

We believe in Jesus. We believed that he was born and grew up living a perfect, sinless life. We saw how he welcomed everyone in God’s name. We witnessed in horror how he was rejected by his own people, suffered, and died because his way of love was too much for the world to bear. And all of that is an amazing story of love, but it isn’t good enough. Even the most beautiful story of sacrificial love isn’t enough to convince us that God is forever for us—that God is always on our side. Because even when our loving God is running after us and chasing us down with that love, there’s always a part of us that’s still convinced that he’s chasing us down to punish us, to hurt us, and to reject us. We can’t help it. We’re human beings. And he’s God. And how is the all-powerful, all-knowing, all-holy God ever going to convince a world full of puny, limited, sinful people that he is really on our side?


“In the beginning was the Word, and the Word was with God, and the Word was God. All things came into being through him, and without him not one thing came into being...And the Word became flesh and lived among us.” In God’s perfect way, instead of running after us, trying to convince us of his love, God became one of us. The Word became flesh. God, who for all time and all space, who even before time and space existed, loves so perfectly and completely that that love is reflected in and throughout all of creation. We are created because of that love and within that love. And that love is so perfectly complete—so unreservedly outwardly focused—that it cannot not be contained within God. It always spills out and spills over. That the Word would become flesh—that God would be incarnate in the person of Jesus Christ—was always the outpouring of that love.


God cannot run us down because we would always run away. So God not only comes and meets us, but, in the incarnation, God takes us into himself. It is a two-way sharing. God becomes man so that we would forever belong to him. God is not merely showing us his love. His love becomes us. And we—our human nature—become a part of God. God is so always and totally and completely on our side that he becomes us and invites us into himself.


On Christmas Day, we celebrate the birth of our savior. We rejoice that God’s love and hope and forgiveness have come into the world. But it’s more than that. This isn’t just God’s servant who tells us about God and who shows us how to live and who dies for the sake of God’s love. We look at Jesus Christ and see both God and ourselves—that the two have come together inseparably. This is God’s great love for the world. This is the bridge between heaven and earth. This is God always and forever and unbreakably for us. This is the miracle of the incarnation.
Posted by Evan D. Garner at 11:45 AM
Email ThisBlogThis!Share to TwitterShare to FacebookShare to Pinterest
Labels: Sermons