Converted To or From?


One weekday morning, as I walked through the nave of St. John's, Montgomery, a man I did not recognize waved to me and motioned me over to him. "Hello," I said. "How can I help you?" With a hushed voice, he responded by pointing up at the ceiling and saying, "What are those?" I smiled. The ceiling at St. John's is a brilliant blue painted with beautiful gold images. "It's beautiful, isn't it?" I said. I started to launch into a brief history about the ceiling and how the oil lamps in the church had blackened the surface so thoroughly that no one really recognized what was up there until a great effort was undertaken to restore it, but the man interrupted me. "No," he said, "What are those--those symbols?" 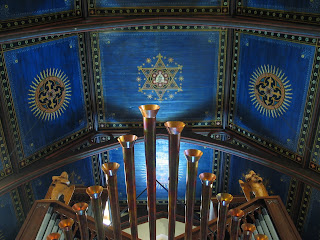 The trompette-en-chamade and painted ceiling at St. John's, Montgomery
Photo credit: Evan D. Garner
When I realized that his question was about the content of the images and not the history of the ceiling, I backtracked. "Oh," I exclaimed, "as you can see, there are two images on the ceiling. One is a Star of David and the other is a cross-centered sunburst." He looked at me suspiciously. "What do they mean?" he asked. "Well," I replied, "the Star of David is a symbol from the Jewish faith, and you can see the "IHS" inscribed on a shield in the middle, and that represents the first three letters of 'Jesus' when it is written in Greek. And the sunburst...well, I don't really know what it means. I suppose it has to do with Jesus being the light of the world, but mainly I think it's just pretty." The man was not satisfied in the least. "Why," he asked in an even quieter tone, "do you have that Jewish sign on the ceiling here in a Christian church?" pointing emphatically and with an accusatory punctuation. "Isn't this a Christian church, or are y'all Jewish?" Realizing that I wasn't going to get very far, I simply said, "Well, Jesus was Jewish, so I think it makes sense. Have a nice day." And I smiled and walked off.
How did we get where we are? How did we get from a Jewish Jesus to a Gentile Church? How did a movement that began as a radical, anti-establishment Jewish sect that rejected the worship of Second-Temple Judaism and emphasized moral and ethical purity to be achieved apart from the apparatus of their religion become a thoroughly Greco-Roman, philosophy-minded faith that is built upon the stories and beliefs of the Hebrew Bible but has almost completely abandoned the tenets of most central teaching of Judaism as found in the Torah? We don't keep kosher. We don't ritually circumcise our children. We don't observe the Passover or celebrate the Day of Atonement. We don't observe the Sabbath. We go to church on Sundays. We eat little stale crackers and drink small sips of exceedingly cheap port wine. We speak of God in three persons, flirting dangerously with polytheism. What happened?
The answer is Paul. Well, the answer is Paul and Jesus and the Holy Spirit, who all worked together to bring us where we are. Today, we remember Paul's conversion from a "Hebrew of the Hebrews" and arch-persecutor of the church to the one who brought the gospel of Jesus to the Gentiles. As a twenty-first century Christian, who lives so long after Paul, it is easy for me to understand where we ended up. And, as I continue to study Judaism, I find it easier to understand where we came from. But I think I completely undervalue the transition--the conversion--from one to the other, and, as my conversation about the ceiling at St. John's reveals, I suspect that others do, too.
Perhaps this is a controversial statement, but I believe that Paul was Jewish for his whole life. I don't think that should be surprising or controversial, but the antinomian rhetoric associated with Paul suggests that many would disagree. But how could he not be Jewish? It's clear in Acts that Paul continued to go to synagogue and the temple and observe central elements of the Jewish faith that he would have also argued that Gentiles did not have to observe (see, for example, Acts 21:26). It seems, therefore, that he was not converted away from Judaism but was converted to the way of Jesus. Paul was, without a doubt, a Christian. And it's clear to us that Paul understood how through Christ God's saving work had expanded beyond Judaism and the Law to embrace Gentiles without their needing to convert to Judaism. But the Jewish identity in which Paul was confronted by Jesus on the Damascene road was not ripped from him. It was added to.
When Paul recalls his conversion to King Agrippa in Acts 26, he describes how Jesus accused him of "kicking against the goads" and causing himself pain. God had been trying to guide him with the goad, but, like a senseless beast, Paul was kicking back against his master, causing himself harm. In this moment of revelation, Jesus made himself and God's will for Paul known:

I am Jesus whom you are persecuting. But get up and stand on your feet; for I have appeared to you for this purpose, to appoint you to serve and testify to the things in which you have seen me and to those in which I will appear to you. I will rescue you from your people and from the Gentiles-- to whom I am sending you to open their eyes so that they may turn from darkness to light and from the power of Satan to God, so that they may receive forgiveness of sins and a place among those who are sanctified by faith in me.

We cannot forget where this all starts. We cannot confuse Paul's liberating message of grace with a repudiation of the story of Abraham. To follow Jesus is not to reject Judaism. It is, instead, to reject the notion that works are what define our relationship with God. Whether Jew or Gentile, we are saved by faith. We cannot divorce faith in Jesus from faith like that of the patriarchs. It is the same faith. It is the same trust. It is the same confidence that God and God alone will save us.

The power of the gospel is the power of Paul's conversion. It is the full revelation that our efforts cannot make us right with God. That was as true in Abraham's day as it was in Moses' day as it was in Jesus' day as it is in our day. This is the truth of God: God's love alone has the power to save us. We are called to put our faith in that love. As Christians, we, like Paul, see that love and saving power revealed fully in Jesus. But, as Christians, we, like Paul, also see that love and saving power revealed in the stories of God's people from Abraham through today. Through faith in Jesus, we are converted to God's ancient and universal work of salvation. We cannot forget where that message of salvation began.