Be Known to Us


There is a fraction anthem in the front of the hymnal that we don't sing very often (ever) in our church that captures the moment when Cleopas and the other disciple realized that it was Jesus who was sitting with them at the table in Emmaus: "Be known to us, Lord Jesus, in the breaking of the bread." I have sung those words in other churches, but I have never identified them explicitly with this moment--this episode in Luke when Jesus was revealed to these two followers. I wonder, however, whether it is fair to say that "Jesus was revealed" to them and whether we should instead say that "the disciples apprehended him."

Consider for a moment all of the resurrection encounters you can remember from the New Testament. When has the one to whom Jesus was revealed understood immediately what was standing in front of them? Mary Magdalene weeps outside the tomb and mistakes Jesus as the gardener. The two disciples see that the grave cloths are in the tomb but go back to their homes still unable to understand. Thomas refuses to accept that Jesus has been raised until he can feel with his own fingers and hands the flesh of the risen Jesus. Even though they had already met the risen Lord, the disciples gather behind locked doors out of fear. Standing on the beach, the risen Jesus calls to the disciples in the boat, inviting them to cast their net on the other side, and only when the net is filled with fish do they understand who it is who is speaking to them. And then there's today's story from Luke 24, in which two disciples walk down the road to Emmaus, unable to see who it is that has come among them.

All of that suggests that none of us is ready to meet the risen Lord. Even after we have heard stories of the resurrected Jesus appearing to some of his disciples, we are not prepared to perceive who it is that comes among us. No exposition of scripture, no matter how careful and thorough, can move us from belief to recognition. It's one thing to put the pieces together, but it's quite another to sit down at a table with Jesus. Like the first followers of Jesus, we participate in the body of the faithful--in the body of Christ--not only with our minds but also with our whole selves. We know Jesus as we have been known--fully, intimately, physically, personally.

Caravaggio captured this moment of recognition in his painting of this scene. In it, we see Jesus' hand extended over the bread in the dominical gesture of blessing. We see the arms of the older disciple outstretched in a gesture of surprise and welcome. We see the other in the act of jumping to his feet, leaning forward with hands gripping the sides of his chair as he prepares to leap up to embrace the risen Lord. We see the quizzical look of the man who is serving the meal and who wonders what it is that is going on in front of him. There is movement in this painting. There is intimacy. We are drawn into the circle at the table in the open corner placed right in front of us. The basket of fruit seems like it will fall into our lap at any moment. We want to reach out and slide it a little more fully onto the table. Caravaggio is begging us to find our place there. There is room for us to reach into the canvas toward Jesus. We see where it is that we, too, will meet our risen Lord. 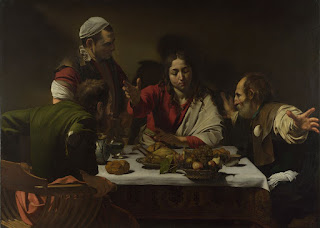 Caravaggio's The Supper at Emmaus (1601) in the National Gallery in London﻿
The image is in the public domain.