On Saturday night, I unplugged our Christmas tree for good. We had set it on a timer, and the lights had already blinked off, but I wanted to be sure that they did not come back on the next morning. Christmas was over. Epiphany had arrived. Since then, we've been taking down Christmas decorations, which is to say that Elizabeth has been taking them down whenever she has a free moment. It's always sad to pack away Christmas, especially in a family that waits until Advent is over (or almost over) to put up decorations and that leaves to go out of town on December 26. But there's one piece of the traditional Christmas decor that deserves to be left up at least through this week.

I love the nativity set. Whether it's simple wood or metal or elaborate porcelain or the child-friendly Fisher-Price set, I love the story that is told by the stable, the Holy Family, the shepherds, the sheep, the animals, the star, and, eventually, the wise men. In a family that insists we don't put Jesus in the creche until Christmas, we are also sure to leave the wise men on the other side of the room until Epiphany. This morning, as we were getting ready for school, one of our children asked where the wise men were. Another child had moved the nativity set down from the shelf to play with it, but the wise men had been left behind. Quietly but dutifully, he found the wise men and brought them back to their proper Epiphany place. It doesn't matter that Matthew tells a different story than Luke. It doesn't matter that the Bible tells us that the wise men came to a house instead of a stable. It doesn't matter that there's no stable mentioned in the Bible at all. The story comes alive in the little figures that gather to see the Christ child.

How appropriate it is that we would linger in celebration over the Epiphany since that is the part of the story that brings us into the narrative of salvation. As you probably know, in many cultures, the Feast of the Three Kings gets more attention than the Feast of the Nativity. That's not only because the wise men brought presents. The arrival of the sages from the east represents the moment when the other peoples of the earth arrive to worship the King of the Jews. This is the moment when the light that God's people Israel have been to the world shines on everyone else, bringing them into relationship with the God of Abraham and Sarah, the God of Isaac and Rebecca, the God of Jacob, Leah, and Rachel. The arrival of the three wise men is our arrival, and not just our own but the arrival of all the peoples of the earth at the feet of the King of kings.

What do the wise men in your nativity set look like? Often in contrast with the rather Anglo-appearing Mary, Joseph, Jesus, and shepherds, the wise men have dark skin tones that match their exotic near-eastern attire. In the Fisher-Price set in our house, one has pale, white skin, another looks east Asian, and the third appears to be of sub-Saharan African descent. I doubt that, when the wise men saw the star and decided to follow it, they were at some pan-national astrology conference, which would have made it reasonable for three individuals from geographically diverse origins to make the journey together. But, intentionally or not, the Fisher-Price set makes an appropriate theological point: Epiphany is, as our prayer book calls it, the "Manifestation of Christ to the Gentiles." This is the moment when all the peoples of the earth discover the universal saving love of God, our Creator. But sometimes we forget what that really means. 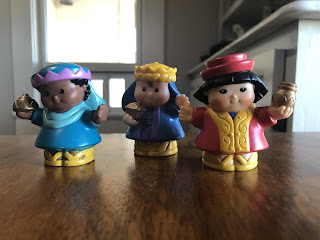 I heard a story this week of someone who grew up decades ago with only two wise men in her nativity set. Why? Because the third one was black. Her parents didn't want a dark-skinned wise man in their nativity set. Of course, the truth of Epiphany is that God's plan of salvation meets all the peoples of the earth: Jew and Gentile, black and white, Asian and African, Pacific Islander and European, descendant of slave and descendant of slave-owner. The wise men remind us that everyone belongs in God's narrative of salvation. But, when, after generations of belonging in the story, we feel comfortable enough to change the features of the shepherds and angels and Mary and Joseph and Jesus to make them look like us, we often lose touch with the power that the wise men represent. We belong in this story not because of who we are but because of who God is. God's grace has broken down the ethnic barriers that would keep us apart. We are the peoples from afar who have come to adore the savior of God's people that he might be our savior, too.